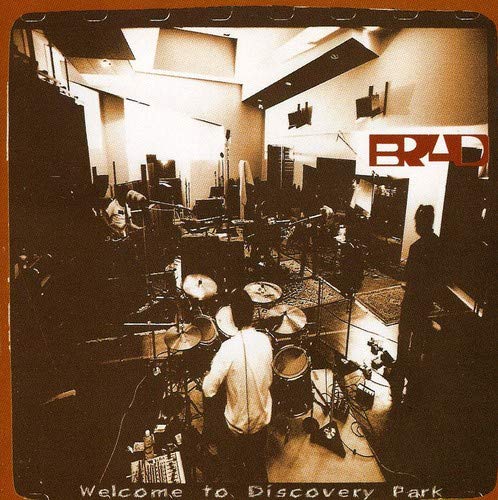 Ori Release '02. Third album by the Seattle-based band , includes 2 bonus track "It Ain't Easy" amp; "Make Me Crazy" that is N/A in the Already-US-Deleted edition.

Brad further demonstrate a propensity for musical comfort food, '70s rock style, on their warm-sounding, soul-infused third album. "i"Welcome to Discovery Park is a funny title for this recording, since there's actually little to uncover here. If you've listened to the radio since 1970, you can anticipate chord progressions and guitar solos. But the classic-rock textbook sounds just fine in Brad's hands, especially with production assistance from Phil Nicolo of the Butcher Brothers. While not as inventive as works by Wellwater Conspiracy (another retro-minded Seattle outfit) or Queens of the Stone Age, Discovery Park is not without its charms. Set highlight "La, La, La" is a warm blast of soulful pop-rock that is sure to keep fans of Urge Overkill and Grand Funk Railroad smiling for days. --Mike McGonigal

"Making music with this band has always felt so natural," says Regan Hagar. "Everyone comes in with their own ideas and I think our confidence in each other allows us to combine those elements really easily."

Brad has been making beautiful music together for a over a decade. "I really trust the band's musical opinions and when we get together, it just works, immediately," says Smith, who has also recorded as a solo artist and with bands Satchel and Pigeonhed. (Pigeonhed's "Battle Flag" proliferated traditional and non-traditional musical outlets from film to radio, dance clubs to in-store play, and even television shows--most recently The Sopranos.) Brad's other members log in time with other bands as well: Stone Gossard with Pearl Jam, Hagar and Berg with Satchel.

Brad's long-standing and deep friendship is most evident in their latest work, equally showcasing the band's expressive collaborations and its members' distinct individual personalities. "We have always come back to it but we had to let it refine and redefine itself," Gossard professes. "That has been an interesting process and one that I'm eager to share once again." Brad's debut album "Shame" (Epic, 1993), featuring hits such as "Buttercup" and "20th Century," caught the ears of fans and critics around the world. "Brad's streamlined grooves and emotive melody lines are shamelessly soulful and as hummable as hell," said the U.K.'s Q magazine. The album was recently listed in The MOJO Collection: The Greatest Albums of All Time. The band followed it up with "Interiors" (Epic, 1997), highlighted by such tracks as "The Day Brings," "Secret Girl," and "Upon My Shoulders." The melancholy pop hit "The Day Brings" received widespread airplay and offered ample evidence of Smith's expressive vocal power, capable of soothing ears and stopping hearts all at once.

Your research deserves the best

We manufacture equipment that is used in life science laboratories all over the world. While our core focus is electrophoresis, our extended product range features everything from pipettes to radiation shielding.

Our bestselling range of gel tanks for agarose gel electrophoresis

PAGE tanks that work with pre-cast and hand-cast gels

Our reputation is built on Quality Reliability Service

Founded in 2004, we work with customers around the world to advance their research with products that reflect our key values.

With a manufacturing and distribution hub based in the heart of the UK, we are well placed to supply our products to both the national and international markets.

We sell our products directly, via our website, and through a network of approved distributors around the world.

Find a Distributor
Our Services

We can produce products for your private label brand, with changes to our colours and designs.
Learn More

We have capability to custom make laboratory equipment to your specifications.
View Projects

Cleaver Scientific manufactured us 10 x custom made electrophoresis tanks for running our Gene Read gels. The tanks were made to the exact specification we had requested, and we are extremely pleased with the finished product. From my initial contact with Tanvi (International Sales Manager) I found her to be particularly helpful; as was Lisa from the shipping department. Overall the service we received from Cleaver Scientific was excellent and they produced us a high quality product for a really competitive price. We would be more than happy to use Cleaver Scientific again in the future.
Sharon McCormackNHS/GDL Mancheste
Here at Touchlight Genetics we need and require a sterile workspace for the preparation of our RNA and DNA samples and templates. We have therefore made good use of our UV Sterilisation Cabinet from Cleaver Scientific, which enables us to work in a clean, safe and contained environment. Touchlight Genetics would highly recommend this product and Cleaver Scientific as a supplier as their customer service has been excellent. Cleaver Scientific has been extremely supportive in ensuring their product is well maintained and meets our requirements.
Dr Lydia HunterTouchlight Genetics Ltd
I use the runVIEW system for my PCR product analysis and especially for gel extractions of DNA. Having the blue light and lid filter build into the system means it’s easy to monitor migration of your bands in real time and cutting out bands is easy. Importantly using the blue light makes sure that my DNA is not degraded and I’ve found that it massively improves the success and quality of my downstream cloning. I use it together with the RunSafe stain and the sensitivity is the best I’ve seen for non-ethidium bromide stains.
Andrew Currin, PhDManchester Institute of Biotechnology
I used much less Blue prestained protein ladder than our usual ladder and I got really nice and defined marks that transferred very well on the blot.
Nicole MaiWellcome Trust Centre for Mitochondrial Research, Newcastle University
Previous
Next

Reagents and Chemicals for Western Blotting

The Complete Solution for Western Blotting

We manufacture several ranges that are used in viral research and diagnostics. Click through on the products below for more information.

We’re the same great team with the same commitment to quality, but now you can browse a larger range with much greater ease and selling points to say why this is a benefit to you.